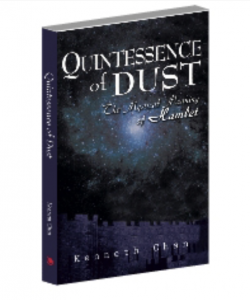 Shakespeare’s Hamlet contains a profound spiritual message for mankind that has been largely unrecognized for centuries. The meaning of Hamlet so perplexed critics over the last four hundred years that many finally concluded, after immense struggle, that the play lacks a binding philosophy. Nothing, in fact, is more wrong.

Quintessence of Dust now explains how Shakespeare meticulously crafted every scene to convey, through our emotional involvement in the drama, a central spiritual message. The book also explains by a single coherent theme practically every aspect of the play that has puzzled critics for centuries, including the following:

All these, and more, are shown to be artistic means of imparting the central message of the play. It demonstrates that Hamlet is nothing short of an artistic miracle, reflected both in its poetic brilliance and in its profound meaning.

Why Hamlet Delays His Revenge

The Meaning Behind the Dialogue Between Polonius and Reynaldo in Hamlet

Why does Shakespeare dwell so much on this dialogue, especially since we never hear of Reynaldo, or what he did with the instructions to spy on Laertes, ever again? This paper reveals that Shakespeare actually crafts the dialogue to convey a profound message – a message that resonates through the entire play to reach a thundering climax at the final duel scene.

How Shakespeare makes use of these three techniques to convey the deep meaning in Hamlet: Cohesive unity, focused allegorical scenes, and thematic resonance. They provide overwhelming evidence for Shakespeare’s authorial intent in meticulously crafting Hamlet to convey a profound message.

Feel free to drop me an email! Kenneth Chan author@kenneth-chan.com

Other Works by Author

Quintessence of Dust: The Mystical Meaning of Hamlet